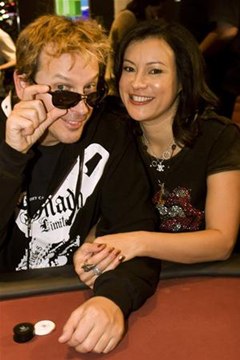 "'Wow, 115 hours, I should have my head examined,' said Laak, as the number appeared on the running clock on a laptop screen next to his seat at the Bellagio Hotel-Casino in Las Vegas. 'I am definitely sick.'

The 37-year-old pro began playing at 12:00 pm local time last Wednesday at the famous resort and quit at 7:00 am on Monday saying he still felt fine but didn't want to 'do any more damage to my body than necessary.'

He was permitted a five-minute break for every hour he played and could bank those for longer breaks. While he vowed he did not consume any caffeine or stimulants, he did manage at least one 30-minute nap.

Paperwork and video evidence to document Laak's feat is expected to be submitted this month to Guinness World Records, but it was witnessed live via a webcam by more than 130,000 people each day from more than 90 nations."

I have to say, his $6,766 in winnings seem somewhat meager considering the time he banked! Laak has generously promised to donate the cash to Camp Sunshine, a Maine camp for children with life-threatening illnesses and their families.

Want to master Microsoft Excel and take your work-from-home job prospects to the next level? Jump-start your career with our Premium A-to-Z Microsoft Excel Training Bundle from the new Gadget Hacks Shop and get lifetime access to more than 40 hours of Basic to Advanced instruction on functions, formula, tools, and more.

Other worthwhile deals to check out:

Join the Next Reality AR Community

Get the latest in AR — delivered straight to your inbox.